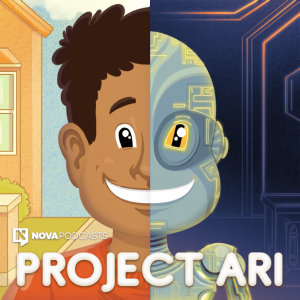 The Stop it at the Start campaign is proud to partner with NOVA Entertainment to deliver Project ARI, a new podcast to help kids understand the importance of respect.

Follow the story of 10-year-old Ari, who’s the world’s first artificial intelligence prototype, as he tries to wrap his ‘data brain’ around the human experience. This series is funny and silly, with plenty of heart, and has been designed as a tool to help start meaningful conversations with kids about respectful behaviour.

The podcast is voiced by kids for kids, as well as some familiar voices from NOVA Entertainment, including Kate Ritchie, Michael ‘Wippa’ Wipfli and Cameron Daddo. We’ve also got special guest cameos from Matildas soccer player Kyah Simon and sports journalist Mel McLaughlin.

Download Project ARI from wherever you get your podcasts.

EPISODE 1: Make Friends
Join Ari, an artificial intelligence prototype disguised as a 10-year-old boy, as he tackles his very first mission into humanhood…to make friends. This may seem like a simple mission, but just like learning ‘the floss’, things aren’t always as easy as they seem.
EPISODE 2: Play Like a Girl
Ari’s quest to become more human continues this week as he attempts to learn how to play sport with some help from a very special guest…Olympic athlete Kyah Simon.
EPISODE 3: Achieve Likes
Well, it was inevitable really, but this week Ari has discovered social media and he has big ambitions to ‘go viral’. Like most of Ari’s plans, this one doesn’t go quite as well as he’d hoped.
EPISODE 4: Win Best Costume
It’s Ari’s very first Halloween and his costume obsession has reached new levels (and so has his ability to rattle off Halloween trivia). Will he be able to come up with the perfect costume to take out the Best Costume award at Quinn’s big Halloween birthday party?
EPISODE 5: Excursion Time
Ari is very excited to be going on his very first school excursion, just like a real human kid! He’ll get to ride the bus, be partnered with a buddy, and check out a real-life space suit. But things don’t go to plan when the school bully Jeremy gets up to his old tricks.